How Autism and Queerness teach us how to find the rainbow in a black and white world.

I am Queer and Autistic.

I was diagnosed Aspergers during a stay in an institution aged 17. Although, at the time, it gave reason to a lot of my struggles, it seemed a fairly useless thing to pay attention to. I didn’t really understand what it meant socially, politically or even personally. It was simply another thing to add to the list of things that made me sick.

I have never been diagnosed queer and fortunately was born in the UK in a time where queerness is no longer considered a disorder. But I do happily identify as Queer now. Because thanks to my experience and journey I certainly have a greater understanding as to what this means socially, politically and personally.

For me, autism has taught me huge amounts about my queerness and I have been able to use models of queerness to free my autism. Give it space to feel ecstatic, comfortable, valued and productive. 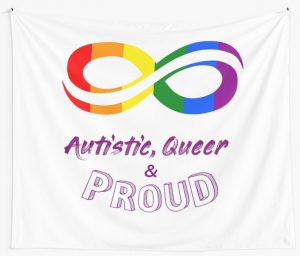 Autism is SO queer! – the interconnectedness of thought patterns, the fluid logic that doesn’t understand seemingly illogical rules of gender, sexuality, blue and pink, authority without question, lying, unnecessary tradition, ceremony and complication, avoidance of problems and brushing stuff under the rug that the rest of society seems to follow without question.

We have the ability to open ourselves to completely radical, new ways of thinking provided they look to a solution.

Typically a solution to a problem that exists in an oppressive way, a problem that doesn’t really need to exist, but does because that route works for neurotypicals or people who see themselves as the majority and the other routes have been brushed off the table.

I have found that frequently, in life, you are offered one or two ways of doing something. You either succeed or you don’t, you are right or wrong, gay or straight, boy or girl, employed or unemployed. It’s a case of yes or no with no room for maybe.

This is taken into extremes in things like the education system, the mental health system, relationships, marriage and employment. If you are not sane, you are insane and your thoughts don’t matter, if you don’t conform at school you will become a terrible drug addict with no qualifications or direction, and if you don’t have a job – which you definitely won’t get if you perform poorly at school – then you are a failure.

And if you aren’t married with a kid, a house and a mortgage by 30, what was the point?

I am queer and I am autistic. And often because of how these are viewed and treated by majority society I have been unemployed, institutionalised, a drug addict, lacking direction, without love, homeless, scared, poor and completely insane.

I have struggled with the education system, been kicked off my philosophy A-level for asking too many questions, been bullied daily into submission resulting in poor attendance and disruptive meltdowns. I have been systematically abused by low-key homophobic staff and teachers, denied ears to listen to what I was struggling with because they thought they had it nailed and that I was just kicking up a fuss.

I have struggled in employment because I wasn’t “the right look”, too “extreme” or my needs didn’t matter, because sales targets, image, budgets, rota’s or customers are more important.

I have struggled to find purpose in life because I sleep with people who I don’t wish to reproduce with, and growing up I had no narratives or idols to look to who weren’t insanely famous or dying of aids or both. And I didn’t want to get married and have kids because I hated the idea of being tied down by anything until I had pursued my dreams.

My dreams of becoming a famous dancer and spreading energy and joy which were considered unrealistic and selfish and worthy only of failure by mainstream society and parents of other kids.

And then when I finally cracked, I struggled in the mental health system because therapists are an 8 month wait away, and even when you finally get to see one they are shocked by what you have to say. I found no-one paid attention to why you are struggling because according to them if you don’t function like everyone else then you, yourself are subjectively THE problem; and solutions are so expensive, mysterious and time consuming that it’s much easier to say that you are impossible to understand and that you are sick. So you get miserable and hopeless and end up in hospital.

This was my experience for a long time. Until I found Queerness. And Recovery (or 12 step programs as they are more popularly identified as), which I actually find pretty queer in principle too.

I was lucky to move to London clean, sober and working on myself. I met some peers, and then some friends and even some idols who were all a whole lot more relatable and realistic than anything I had come across before.

These people didn’t mind that I had a very loud mind and that I had loads of thoughts, and wanted to share them and understood that if I didn’t they might eat me up. They also understood if I got overwhelmed by big noises or distractions. And that I had an unconventional way of expressing myself.

They went so far as to encourage it. And to grow it. And even to listen so well to what I had to say that they could interact with my thoughts and offer up some truly engaged debate.

I met Larry Tee and Sink the Pink, both queer Idols whom took me under their wings and taught me that it’s completely wonderful to do things how I saw fit. Providing it was done with love and caused no actual harm to anyone knowingly. And that often, “the majority”, doesn’t know the best way.

They taught me to love myself in all my forms and to explore those forms and try something new. To experiment with my gender, to bend it, to dance in my style, to be sexy in my way, to listen to music, to draw pictures, to put on events, to not see things as big and scary, but completely possible and available to me. They taught me that mistakes are not failure, and that perfection can be limiting, and instead of self-loathing to learn from all my experiences. They taught me to not fear the cracks but to find all the good juice in there that everyone else was missing. They taught me that although there may be healthy boundaries and respect, there is no black and white, and so often there are rainbows that majority society is completely blind to.

I find it utterly infuriating when as autistic people we are told we are black and white. My experience is that I have a whole lot of time for the maybes, the grey areas, the endless fields of dark matter and the potential paths, as long as there is strong potential for a solution or a nugget of truth the be unveiled.

And the more this has been encouraged by my queer peers, the more grounded and relaxed I feel in my autistic soul.

These principles of queerness; the openness, the willingness to explore, the ability to mess up, get up and keep going, the freedom to share and express my emotions, my body and my mind as well as the time and patience to allow me to figure out what these expressions are, have freed me. This queer menu offers me a suitably unconventional way to function in the world.

Around its systems, its boundaries, its policies and blind truths. It helps me to seek help, to open conversation and to commune with like minds to see what can be done between the “yes” and the “no”.

I am Queer and Autistic, and because of queer guidance, I am no longer sick! I don’t need to be employed, I am not a drug addict, I have love and can share love, I have options and possibilities, I have lived out dreams, I don’t need a mortgage and a kid to feel happy, but if I decide I do want those things I can also make them work. I am in movies, and music videos and magazines. I am an activist, writer, performer, bar-top stripper, family person, genderqueer human, nature lover and charity worker.

I enjoy solitude and specificity without shame, I enjoy my logic and know it has value.

I am certainly not a problem, a disorder or an illness. I could in fact be a mirror to some of society’s problems and a potential vessel towards solutions and options. And although the path may be rocky and struggles still appear. At least I have the map of Queerness as a very open-minded guide.